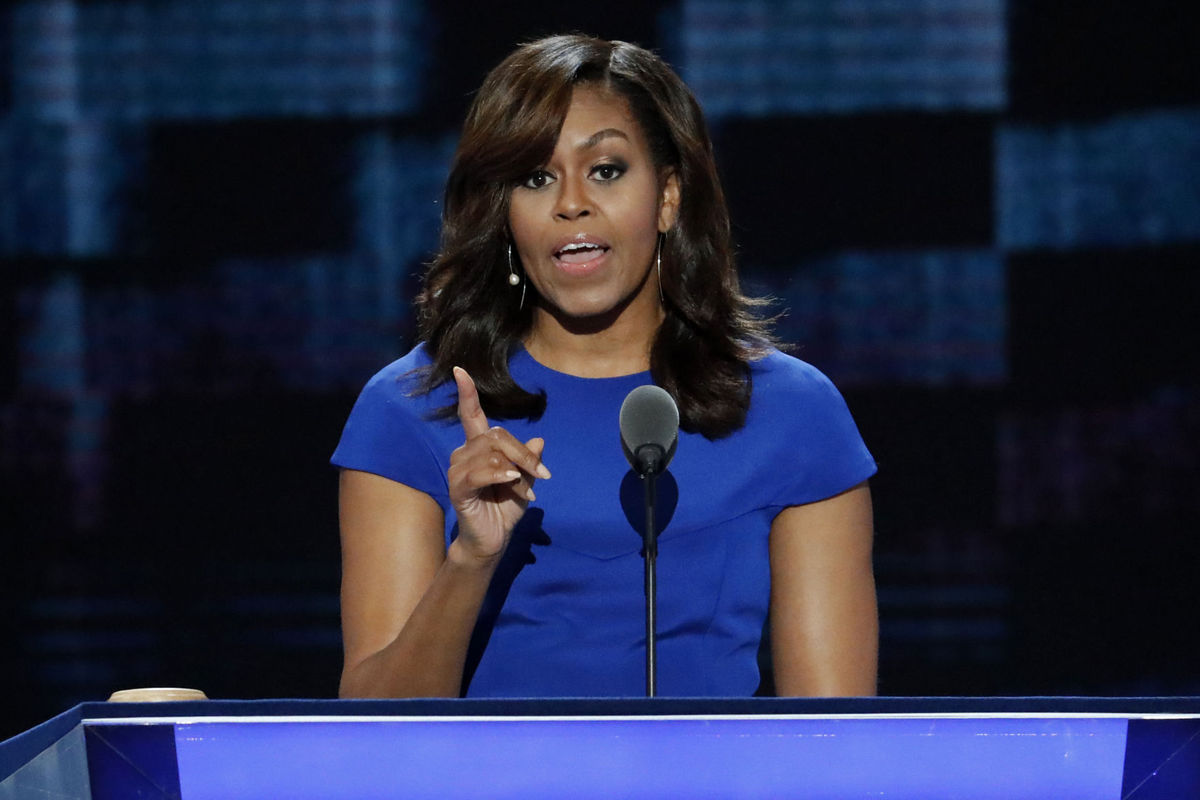 Former First Lady Michelle Obama is on the campaign trail as a top surrogate for Joe Biden.

And the terrible thing Michelle Obama said about America is something you need to hear.

Former First Lady Michelle Obama is trying to rally the Democrat base to turnout this fall.

But she just crossed an unthinkable line.

And Michelle Obama told a racist lie about America that will make your blood boil.

Candidates usually run for office by appealing to love of country and explaining how their policies appeal to voters’ sense of patriotism.

In 2020, the Democrats abandoned this paradigm.

Their nominating convention amounted to a four day struggle session where speaker after speaker decried America as “systemically racist.”

On the latest episode of her podcast, former First Lady Michelle Obama invited her brother Craig Robinson and her mother Marian to appear where they ran down America as filled with racist police officers that went out of their way to torture black people.

Obama told a story about how her brother Craig was riding his bike home and had an unfortunate encounter with police which they then turned into an indictment of all police interactions with black Americans.

“You were riding down the street and you got stopped by the police, and they accused you of stealing your own bike,” Obama stated. “And they would not believe you, to the point where you were like, ‘Take me to my home.'”

Craig Robinson said the experience was “terrifying” and that he was “heartbroken,” especially because he was “always taught that the police are your friends … and they’ll believe the truth.”

“What a lot of folks who are not in our position don’t understand is that this is such a way of life when it comes to interacting with the rest of the world,” Obama added. “It doesn’t matter who you are and what kind of values you have, nobody thinks about the fact that we all come from good families that are trying to teach values.”

Obama then falsely claimed all police officers automatically judged black Americans of being criminals that they were well within their rights to kill blacks on the spot.

“When you leave the safety of your home and go out into the street, where being Black is a crime in and of itself, we have all had to learn how to operate outside of our homes with a level of caution and fear, because you never know,” Obama raged.

But Michelle Obama was not finished.

Obama claimed that the racism of the police extended to the country as a whole and she claimed Barack Obama could not have gotten away with any of the things Donald Trump has.

“When we were in the White House, we could’ve never gotten away with some of the stuff that’s going on now, not because of the public, but our community wouldn’t have accepted that. You worked, you did your best every day. You showed up,” Obama fumed.

This lie is easily debunked.

In his Presidency, Barack Obama got away with running guns to Mexican drug cartels that were used to kill border patrol agents.

The IRS targeted Tea Party groups for political harassment in an effort to silence them before the 2010 and 2012 elections.

And Barack Obama even killed an American citizen in a drone attack.

And Edward Snowden revealed Obama was illegally spying on every American’s phone calls, emails and text messages without a warrant.

Had Donald Trump been caught in just one of these scandals, not only would he have been impeached, but he would have been convicted and removed from office.

Instead, contrary to Michelle Obama’s false version of history, the fake news media and Washington establishment shrugged their shoulders at these scandals.